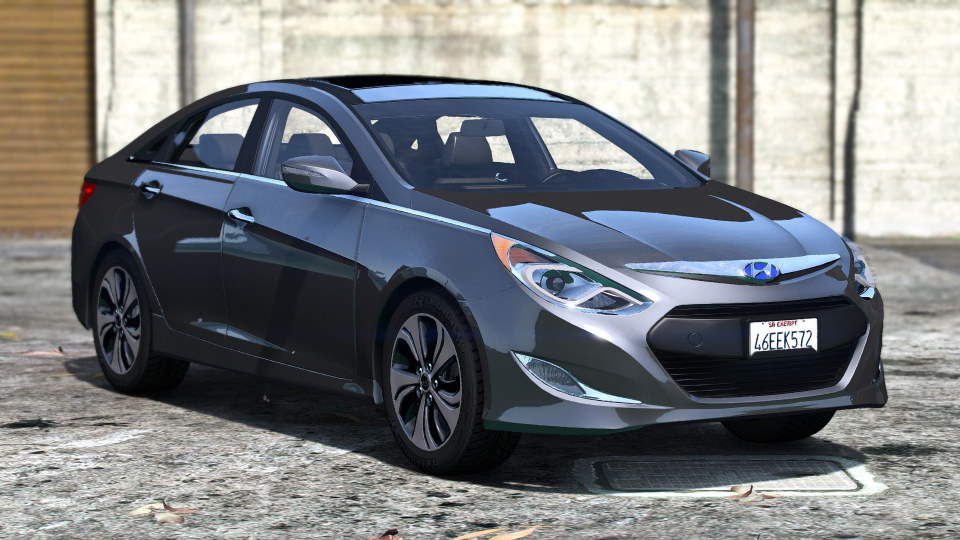 The updated version of Hyundai Sonata 2015 is available now at gtacarmods.com for free. Download this mod for GTA 5 and enjoy.

The 6th generation of Hyundai Sonata line up ( Also known as YF and i45 ), started its production in 2009 and continued until 2014. It was at this era that Hyundai began to introduce innovative designs into its models. When you compare this generation of Sonata to its predecessors, it is hard to find a resemblance to them.

The Hyundai Sonata YF received a mild facelift in 2012. With some changes in grill materials, new led and fog lights, and also a couple of new elements in the interior. Such as a new touch screen and new climate controls. Nothing too drastic.

The bigger change came in with the Hybrid model. The Hyundai Sonata Hybrid sales began in 2011 and lasted until 2015. Compared to the base model, it has new headlights, redesigned front bumper, and a different interior with the new instrument panel.

The Hyundai Sonata 2015 uses the lithium polymer battery technology which is a part of Hyundai’s Blue Drive powertrain. This drivetrain combines a 2.4 Liter engine and a 30 KW electric motor that enable the Sonata 2015 to have 199 horsepower.

If you’ve followed us from the beginning, you know that this is our second mod released on this website. As we looked back on our earlier mods, we noticed some of them need fixes, and some even need to be replaced with better 3d models. The Hyundai Sonata Hybrid GTA 5 mod only needed some re texturing, fixing some of the missing parts like air vents, badges, door frames, etc. Let’s see the list of features and everything that has been fixed.

If you are not familiar with installing mods, read this thorough article on How to install mods. Addon name: gcmsonata15