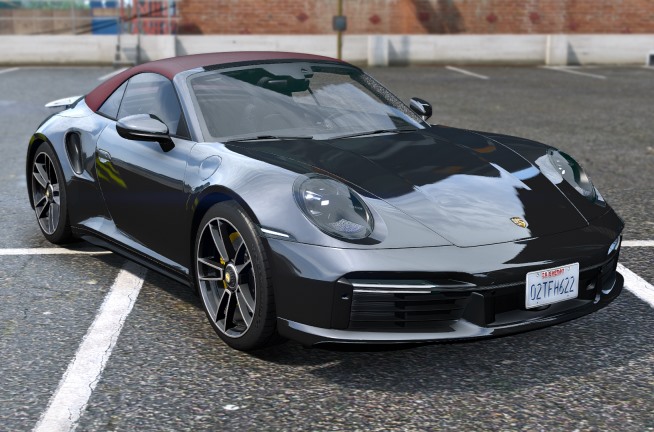 In every generation, there are so many different models for 911s which is hard to distinguish them if you are not a Porsche enthusiast.

However, there is no need to worry. When we complete our 992 series on the website, you’ll be able to have a full collection of this beautiful car and compare each version with another.

Also, there will be a comprehensive article on the website, explaining each version, its features, and specs.

Back to the 992 Turbo S Cabriolet. Currently, amongst all of the different 992 models available, the Turbo S variant is the fastest one. Although the non-Cabriolet Turbo S version is 0.1-second faster than the Cabriolet one.

The Porsche 911 Turbo S Cabriolet 2021 has a 3.7 L twin-turbocharged flat-six engine that is only available for Turbo and Turbo S variants. The Turbo S can produce 641 horsepower which makes this car reach 0-100 in only 2.7 seconds ( 2.8 for Cabriolet ).

It’s a beauty both outside and inside. You might be familiar with the interior of the 992 models since we have already released the GT3 and Targa variants. It has basically the same interior with some small differences in trims and details.

On the outside, however, it has major differences and in my opinion, this Cabriolet version is the most beautiful one amongst all of the other generations.

Huge air intakes on the rear fenders and the adjustable rear wing. This car is ready to be driven and proves why it’s the fastest one in the family.

As you might know, we have had plans to release a complete collection of 992 models on the website.

This is a huge step for us toward completing this collection since we wanted to convert a high-quality model for the Turbo S cabriolet variant.

our plan for this mod is to eventually make an animated roof for it, but for now, the roof is accessible to add/remove in the ‘extra’ section.

If you are not familiar with installing mods, read this thorough article on How to install mods.
Addon name:   gcm992tscabrio