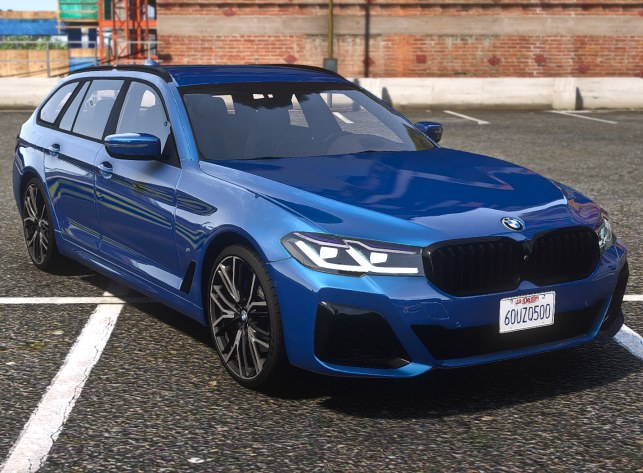 The 5! We have already praised the facelift of the BMW G30 enough (BMW M5 2021) but honestly, we couldn’t get enough of it. So we had to make this model to complete our collection.

As previously mentioned, I personally think this is one of the best facelifts ever done not only for BMW products but for every other brand.

The Station Wagon ( marketed as Touring ) has the same width and length as the sedan, but it’s slightly higher in the height.

Similarly, it benefits from the same engine as the sedan.

The front of the car is identical to the sedan variant. The big change becomes clear when you look at the back of the car. Due to the added space and the unique wagon shape of the car, you can place 560 liters of luggage in the back of your car.

Traditionally, Station wagon cars used to be for huge families, and they had boring and unattractive designs. But recently German car manufacturer giants have changed that tradition completely. These station wagons are the best choice for people who need sporty, beautiful cars with huge amounts of luggage space.

This model of the 5 series is so stunningly beautiful that we had to get the touring version to complete our collection.

Comparing this mod to all the other BMW 5 series 2021 mods available right now, this one is not only the first touring version available but also the first one with the correct interior model.

Also, there is another unique feature only available for this mod. It has a completely 3d headlight model with all the details available.

Right now this model doesn’t feature a 3d engine bay, but it will be added to it in the near future. We just had to push it to get it ready for the promo and later on add the engine to it.

If you are not familiar with installing mods, read this thorough article on How to install mods.
Addon name:   gcmm5sb