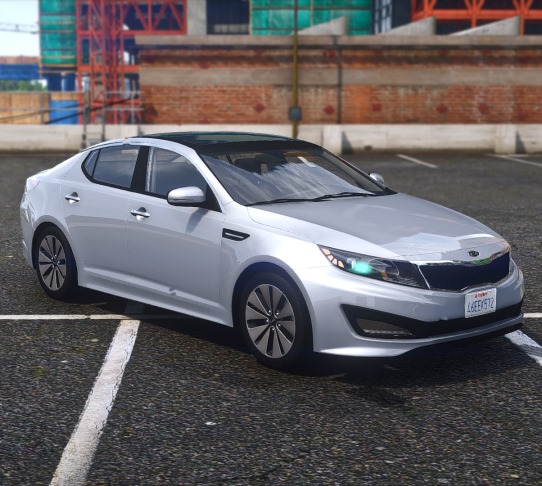 During its lifetime, it received a facelift in 2014 which included a new front and rear bumper with a new set of taillights and headlights.

The Pre-facelift Kia K5 is the mod that we have presented on this page, was not the first Optima that had the new signature Kia’s grill design ( it was the facelift version of the previous generation ), But it made that design much more mature and also aggressive.

This is something that got even more exaggerated in the next generations and the latest K5 model looks like an angry animal that wants to attack you!

Back to the third generation K5, this model had many different engine choices, that mostly were available from 2010 since 2015.

The weakest engine was a 1.7 diesel one, which could produce 134 horsepower. Nothing to get too excited about, to be honest.

But there is a much better option. a 2.0L Theta II GDI Turbo which is capable of producing 267 horsepower. Much better right ?

It’s been a while since we have released a Kia and as always, it has the best quality you’ll find for this model.

We have tried a new method for the headlights, it’s suitable for cars without LED headlights. It basically projects the lightbulb’s reflection into the Headhlight’s glass and creates a more realistic look.

Comment your opinions about it, also about the other features of this car. Find any bugs? let us know.

This mod has a full interior with quality door panels and door sills like all of our other mods. But it lacks the engine and the trunk due to the model size.

To read about the usual features of our mods follow this link: Our GTA 5 Mods feautres

If you are not familiar with installing mods, read this thorough article on How to install mods. But if your game is already suitable for mods you can add the mod to your game with this name:  gcmoptima11